One month after seeing him induct the E Street Band into the Rock & Roll Hall of Fame, I was lucky enough to see Bruce Springsteen and company in concert at the Mohegan Sun Arena in Uncasville, CT (please forgive the poor picture quality…..I was in the last row and the lighting was fighting me!!!).

Bruce and the band were in their usual exquisite form, performing classics like “The Promised Land”, “Born to Run” and “Dancing in the Dark” to sublime covers of Gary U.S. Bonds’ “Quarter to Three” and the Isley Brothers’ “Shout”. But my favorite moment of the night? A beautiful acoustic version of “Thunder Road” by Bruce, his guitar and his harmonica-with accompanying vocals by the audience. Sublime. Special thanks to the Rhode Island guy sitting next to me for making the night extra fun.

A Springsteen concert is like a family reunion. You get together with people you did not know you were related to, but once you discover you are family, you party. And dance. And sing. To some of the best music ever made!!! 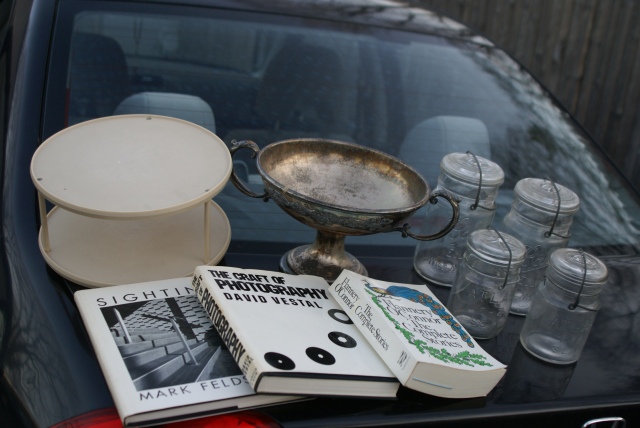 On my first day doing the estate sale thing this season, after I hit the motherload of sales, I was driving to a second sale when I spotted signs for yet another sale. This one did not have any White Ironstone, but it had everything else.

I picked up a Lazy Susan, a tarnished silver footed bowl (not sterling silver…..I wasn’t THAT lucky LOL), four old Mason jars with their lids and three books-all for $10.00!!!

The season has just begun-go get your bargains!!!

Why oh why didn’t I play the Lotto after such a lucky day??? I could be posting this from my new home in Paris!!! LOL

My first estate sale of the season was a rousing success!!! Ten pieces of B-E-A-U-T-I-F-U-L White Ironstone (that’s right-10!!!) were just sitting in a box waiting for me!!! What a find!!!

Now for you purists out there-no, the pieces are not flawless. But then again, I am not a flawless kind of girl. I consider my collection “the island of misfit Ironstone”. I LOVE when there are visible brown crackled spots and other obvious signs of age. I adore the fact that these pieces had a life before me, one that did not consist of them sitting in a cupboard for display only. Items like these are too beautiful not to be used every day!!!

If this haul does not make you stop at the next yard sale/garage sale/ estate sale you see, YOU ARE CRAZY!!! LOL 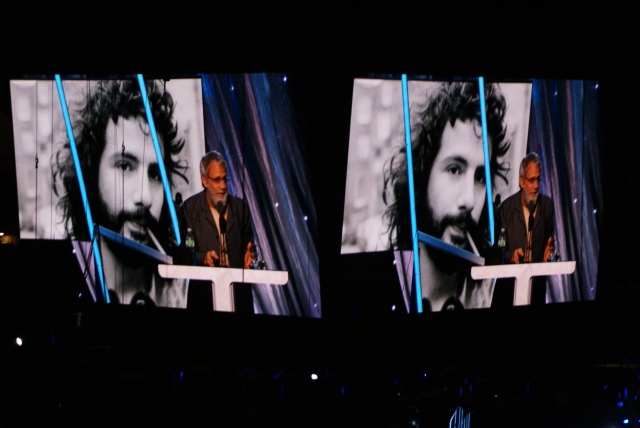 Yusuf Islam, the artist formerly known as Cat Stevens, was another 2014 inductee into the Rock & Roll Hall of Fame. Seeing him perform three of his classics-“Father and Son”, “Wild World” & “Peace Train”, was worth the price of admission.

After his abrupt departure from the music world, followed by some ridiculous misquotes by the press, it did not seem like I would ever have the opportunity to see this incredibly talented singer/songwriter perform live. The fact that I saw him at this show, with the Hall of Fame finally giving him his due, was too perfect for words.

Yusef is not the religious zealot the press made him out to be. In fact, the man who graciously accepted his induction from friend Art Garfunkel, was incredibly kind, humble, smart, eloquent and funny. And Yusef’s voice was and is as powerful and passionate as it ever was. The joy his music brought millions is a gift that I cannot get enough of.

The rumor is he is back in the studio working on a new album. And so this gifted musician begins another chapter in his incredible career. Welcome back, Yusef!!!

When I am not antiquing or junking, I pursue my other passion-music. On April 10, 2014 I was lucky enough to attend the Rock & Roll Hall of Fame Induction Ceremony in Brooklyn, NY.

I watched one of my heroes, Bruce Springsteen, induct his longtime backup group, the E Street Band, into the famed hall. This was a dream come true for me. I was not able to attend the ceremony in 1999 when the Boss himself was inducted (I had just gone into contract on my house and extra money was a thing of the past). I promised myself that one day I would attend one of these all star concerts, and when I heard that Bruce’s band was being honored in the class of 2014, I knew this was my year to make my dream happen!!!

After Mr. Springsteen’s touching and eloquent speech, he and the band performed three songs-“The E Street Shuffle”, “Kitty’s Back” and “The River”, which the Boss said was one of Clarence Clemmons’ favorite songs. All three performances were absolutely sublime.

It was one of the greatest nights of my life!!!

This is one of my most cherished pieces of Ironstone……and it was FREE!! I had searched high and low for a pitcher and bowl set for over a year, and just could not find one I loved. So I gave up the search believing I would never find it (after only a year’s search??? What was I thinking??? LOL). Then a friend moved into a new house that had a few items left over from the previous owners and there it was!!

I do not share this to boast but to hope you learn from my experience. The things you love will find you, even if you are foolish enough to give up the search. I am sure of it. Why? Because this little beauty and I have been together ever since it found me. And we could not be happier.

So here’s to the thrill of the hunt…..whether you are the hunter or the hunted!!

One of my definitions of beautiful……..and my favorite flowers in the world!! Don’t they look even more spectacular in Ironstone???!!!