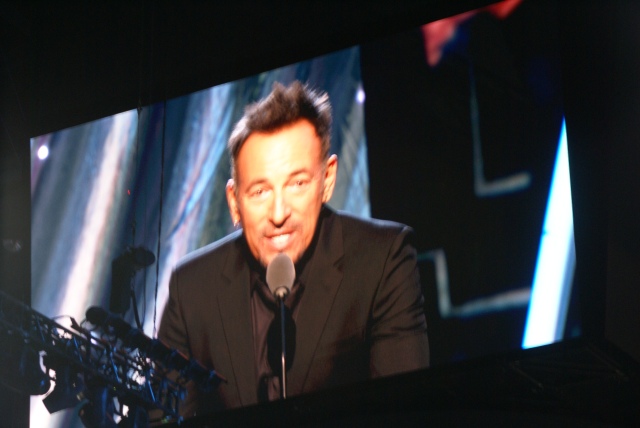 When I am not antiquing or junking, I pursue my other passion-music. On April 10, 2014 I was lucky enough to attend the Rock & Roll Hall of Fame Induction Ceremony in Brooklyn, NY.

I watched one of my heroes, Bruce Springsteen, induct his longtime backup group, the E Street Band, into the famed hall. This was a dream come true for me. I was not able to attend the ceremony in 1999 when the Boss himself was inducted (I had just gone into contract on my house and extra money was a thing of the past). I promised myself that one day I would attend one of these all star concerts, and when I heard that Bruce’s band was being honored in the class of 2014, I knew this was my year to make my dream happen!!!

After Mr. Springsteen’s touching and eloquent speech, he and the band performed three songs-“The E Street Shuffle”, “Kitty’s Back” and “The River”, which the Boss said was one of Clarence Clemmons’ favorite songs. All three performances were absolutely sublime.

It was one of the greatest nights of my life!!!

"Now I've been happy lately
"I've had bad dreams too many times,