This week I, along with the rest of their fans, bid a very sad farewell to my extended family-the Bravermans of NBC’s “Parenthood“.

I adored this show. The entire cast was outstanding, but any scene Craig T. Nelson was in was his-period. How this man was not even nominated for an Emmy Award for his performance as family patriarch Zeek Braverman is beyond me.

And for anyone who thinks of Ray Romano as a mere comedy actor needs only to watch one second of any of his scenes on this show to realize how wrong that thought is. Romano’s portrayal of Hank Rizzoli, a man who realized he had an undiagnosed case of Asperger’s Syndrome and how it had damaged his life was simply stunning. As was his relationship with Sarah Braverman (the very entertaining Lauren Graham).

It was one of the first honest portrayals of a couple over 40 who learned how to navigate the murky waters of a real adult relationship by owning the mistakes that led to where they were in their lives, and where they wanted their cautiously optimistic hearts to take them in the future.

The other thing I have loved as much as the diverse group of characters on this show is the music. The series had the perfect backdrop for it because one of the characters, Crosby Braverman (the adorable and funny Dax Shepard) was a music engineer and spent the last seasons as co-owner of the Luncheonette, a fictional recording studio that saw the likes of people like Janis Joplin in its heyday.

The show also paid homage to the 60’s in many other ways: The family lived in the Bay area of California (home to the Flower Power origins, Haight-Ashbury and many other iconic 60’s movements); Nelson’s character was a Vietnam Veteran; his grandson, Drew, was a college student at Berkeley; Bob Dylan’s “Forever Young” as the show’s theme song, to name a few.

The musical directors of this show did a phenomenal job with the songs they hand picked for each episode (see list HERE), but two Dylan covers win my praise for the best songs of the show’s varied soundtrack (honorable mention to Cat Steven’s “Wild World” performed by Jimmy Cliff as heard at Hank & Sarah’s wedding).

To conclude season five, Richie Haven’s raw and beautiful acoustic version of “The Times They Are A Changing” sent the Bravermans and their fans off to uncertainty about whether or not there would be a sixth season, but not without the benefit of closure and resolution for all of the characters.

For the last song of season six, the series finale, the producers and writers took us on a flash forward a few years into the future to the beauty of Dylan’s “Forever Young” sung as an exquisite duet by Rhiannon Giddens & Iron and Wine (Sam Beam).

That in and of itself would have elicited enough tears, but just prior to this song, Zeek died. My heart sunk. I predicted this from the first episode of this season when he fainted from a cardiac event and many on-line reports had speculated all season that this death was coming. But I hoped for a happy ending…..a real happy ending, where I could imagine Zeek’s expression when he heard the song his grandkids promised to record in honor of his 80th birthday, or how his eyes would well up with tears at the sight of his oldest son Adam (Peter Krause) walking his daughter Haddie (Sarah Ramos) down the aisle.

But sadly, happy endings are not real, and what made this show so damn good was that it was about a real family with real life issues. Which is what life is. And that includes the bittersweet ending as opposed to the happy ending. For anyone of us who has said goodbye to someone in our own lives, we are all too familiar with the bittersweet. So there really was no way for Zeek’s death not too happen, which is why it hurt so very, very much.

A lot of people do not live to see their 80th birthday. Some people will not have their grandparents present when they get married-or even their parents, for that matter. And like real life, no matter how much time you have, it is just never enough. Six years was not nearly enough time with this family. To borrow a line from Jimmy Webb, “endings always come too fast”, whether they occur in real life or on TV.

So goodbye, my beloved Braverman family. I will miss the heck out of all of you.

Hi Vixens!!!  Well winter is in full swing here in NY (close to 3 feet of snow fell here earlier in the week) so I got to enjoy an adult snow day!!!  And what did I do with this precious gift of time, you ask?  I SLEPT!!!  Yes, that’s right.  I slept the entire day away.  (Did you miss the part earlier when I wrote we received close to 3 feet of snow???!!!)

I really love the snow, and the day before the big blizzard work closed early so I celebrated by taking a walk in the falling snow.  Don’t you just love how gentle flakes feel when they hit your face???!!!  Blizzards, however, are no fun to walk in.  Plus, I was starting to come down with a head cold (UGH!!!) so sleeping was the best use of my time that day.

Even if I do not sleep during a big snowstorm, I still like to spend the day under a cozy blanket fresh and warm from the dryer while watching reruns of “The Golden Girls” or old movies. I got into this habit when I was living in Massachusetts, and it seemed like we were getting hit with a snowstorm every weekend. I would prepare by buying my essentials and the ingredients to my homemade lamb stew, then made a big pot of it so it lasted me the whole week. I’d get under the covers while it cooked and reveled in the wonderful way my apartment smelled!!! Those were some of my fondest memories of my winters in MA!!!

But I digress…back to now. The weekend before the squall I hit an estate sale that I stumbled upon while I was doing my usual storm prep (no, not milk and bread but more essential fare:  Diet Lemon Snapple and magazines.  Oh, and ice melt.) I found a GORGEOUS set of silver iced tea spoons. They seemed to be waiting for me as they were even bundled together in a giant gold bow!!! 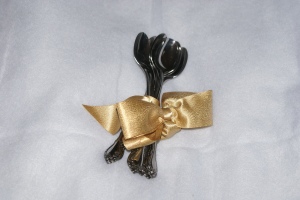 I might have forgotten to share that I collect these since they are a recent addition to my acquisitions. I started looking for them once I noticed how pretty they are with their intricate designs and details. Look at the lovely design on the handle.

Plus, theses spoons are still useful for what they were originally made for-serving ice cream sundaes and sodas-and they do not take up a lot of room to store or display, even in a studio apartment. I placed mine in my mother’s large dessert cups.

What do you collect?

Hello Vixens!!!  Hope you are all enjoying the after-the-holidays lull and the cold winter weather.  OK, maybe it’s just me and a select few who enjoy this season.  But I do.  I love everything about winter:  rosy cheeks, scarves, gloves, sweaters, snow, big pots of stew, hot chocolate with whipped cream, cuddling, how alive I feel when I am outside in the cold and how blessed I feel when I walk into my apartment and feel the warmth of the heat.  I find the entire season invigorating!!!

Another reason why I love the winter so much is because I would much rather go to an estate sale with my coat on because of the cold rather than dying from the heat and the intense musty smell of a house that was closed up for years.

True, there are not as many sales this time of year, but they are enough out there to keep me busy.  It also helps that I do not mind traveling (within reason), especially now that gas is a lot less expensive (YAY)!!!

The sale I hit today had some wonderful items:  a lot of pottery, clothes, bric-a-brac, ephemera, linens and other items.  I enjoyed looking but since I am still downsizing, I did not feel the need to buy anything…..until I came across an old metal picnic basket exactly like the one my parents had.  I do not know what happened to the one they owned, but I knew I had to purchase this replica of some of the best memories of my childhood.

I did a little research on the internet since the name of the company is stamped inside the lid.  My best guess is this is a mid-century model, and it is in great shape.  A smidge of rust here and there on the bottom rim but other than that it is clean. 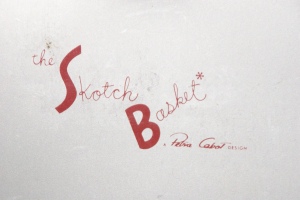 Because it has such sentimental meaning, I did not want to just stick the basket it in a closet until I find a way to use it, other than its intended purpose.  Then I remembered my Christmas tree was still on the curb outside waiting to be recycled, so I cut off a few branches, grabbed one of my snowmen and made a little winter scene.

I threw it together quickly, but I think it’s cute.  I was thinking I could pick up some of those white birch branches from Michael’s, and some twigs and pine cones from outside to fill it in more, but for now I wanted to show you the general idea.

What do you think?  I would love to read your suggestions. 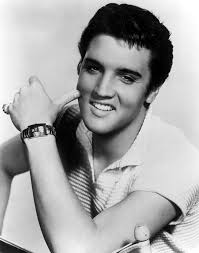 Today Vixens we celebrate the 80th birthday of the King of Rock and Roll, Elvis.  This man did it all:  sang, danced and acted (what is referred to today as a triple threat).  But what we are indebted to him for most of all is bringing rock and roll music-complete with country, R&B & gospel roots plus the songwriting geniuses of Jerry Leiber & Mike Stoller-into mainstream America.

There is nothing I can write about this man that has not already been written, so I will not bore you with words other than these:  Thank you, Elvis Aaron Presley, for the enormous gift you gave and left us.  We are deeply indebted and grateful.

Here is a link to a YouTube montage clip of His Royalty performing one of those Leiber & Stoller gems, “Hound Dog“.  Pay homage to the King!!! 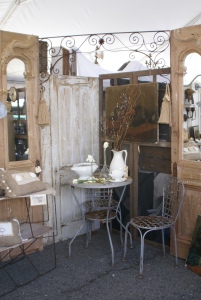