It was 39 years ago today that this channel premiered and music was never the same again.  A station dedicated to letting the world see the music (and the people behind it) as well as hear it was revolutionary.  The rotation began with maybe 10 videos but that did not prevent me from watching it non-stop for hours at a time.  Music videos changed the game for fans and the industry alike.  But unlike streaming that has caused artists to lose control of their own copyrighted material in addition to their earnings, MTV was a money mother lode for anyone willing to climb on board the novel concept.

At first it was newer artists that appeared frequently on the channel, but eventually everyone jumped on the bandwagon.  Some ran with the concept-Hall & Oates, Huey Lewis & The News, Billy Squier, Michael Jackson-to name a few.  Soon even my heroes were embracing the genre.  Remember a pre-“Friends” Courtney Cox’s fancy footwork with Bruce Springsteen in the “Dancing In The Dark” video?  Or watching Eric Clapton’s beautiful hands play fiery solos on his Strat while singing “Pretending” in the pouring rain?  Or an elegantly dressed Marvin Gaye extolling the benefits of “Sexual Healing”?  Videos from other 1970’s artists followed including Elton John, Rod Stewart, Steve Winwood and a host of others who welcomed and embraced the new MTV audience.

Vintage clips of great musical moments were featured like the Beatles first appearance on “The Ed Sullivan Show”, performances from the 1967 Monterrey Pop Festival and the 1969 Woodstock concerts as well as the live broadcast of 1985’s “Live Aid” show from both America & the U.K.  Suddenly our living rooms were front row seats to the best music had to offer.  And thanks to directors from the TV & movie industries getting in on the trend (“Dressed To Kill” director Brian De Palma was the man behind Springsteen’s first clip), by the end of the decade and into the 1990’s videos became an art form.  The “Unplugged” series introduced us to the more intimate side of live performances.  Other music stations including VH1, BET and FUSE followed, but none compared to the original and its level of cool.

If there is one song that defined the early years of the MTV phenomenon, it is today’s.  While the references to homosexuals are outdated & considered offensive in this era of acceptance, and the once ground breaking channel is merely a reality show based venue in these days of YouTube and Instagram stories, this song still has the power to instantly transport those of us who were there at the beginning to the excitement of the new medium.  And to the poor choice some people made to wear sweatbands in their videos. 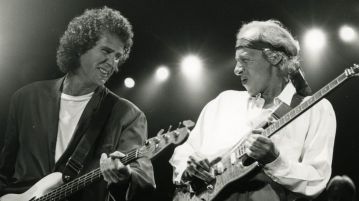