On November 16, 1974 John Lennon hit the top of the charts with the first single from his “Walls and Bridges” album. The song was released in September of that year and Lennon’s friend, Elton John, provided harmony vocals & the piano track for the record. It was his way of thanking Lennon for playing guitar & singing back-up vocals on John’s cover of “Lucy In The Sky With Diamonds” recorded several months earlier (Lennon was credited as “Dr. Winston O’Boogie” on the cover to keep legal issues from the record company at bay).

John was so sure Lennon’s tune would become a #1 record John bet Lennon that if that happened, he would have to join John onstage at his concert at Madison Square Garden on November 28. Lennon agreed because he did not think the song would do that well. But between the upbeat get-you-up-on-your-feet tempo, Lennon’s incredible vocal with sing-along lyrics, John’s boogie- woogie playing style & a horn section that just owned every note they played, this song could not miss.

Once the song made it to the top of the chart, John reminded Lennon of the bet & he was almost physically sick the night of the show because he was terrified to take the stage. It had been a while since he played in a venue that large (The Beatles had stopped touring in 1966 & Lennon was playing smaller places as a solo artist). But all went well & the two men performed three songs together: the “Lucy” cover, today’s pick and a Beatles tune, “I Saw Her Standing There” (the live recording was released as the B-side to John’s single, “Philadelphia Freedom” in February 1975).

The original track featured Paul McCartney on lead vocal, so when Lennon introduced it to the audience, he said it was a song from “an old estranged fiance of mine, old Paul”. And the ecstatic crowd, who cut short their Thanksgiving feast to be at the John concert that night, heard the number one song in the country by Lennon as well as two Beatles songs. If there was ever a concert I wish I could have attended, this is one of them. And one of my favorite rock & roll stories ever.

I also believe this was the last time Lennon was ever on stage, or at least in an arena of this size. He was separated from his wife, Yoko Ono, for about 18 months at the time of this show. John invited her to the concert where she and Lennon reunited backstage afterwards. She gave birth to their son, Sean Ono Lennon, on Lennon’s birthday the next year. John was named Sean’s godfather.and Lennon became a stay at home dad to his son until he went back into the studio five years later to record “Double Fantasy”. It was released 40 years ago today on November 17, 1980.

In March 1982, John recorded “Empty Garden” in honor of Lennon. John performed the song in Madison Square Garden in August of that year and invited his godson and his mother on stage in tribute to Lennon.

Don’t need a watch to waste your time
Oh no, oh no“. 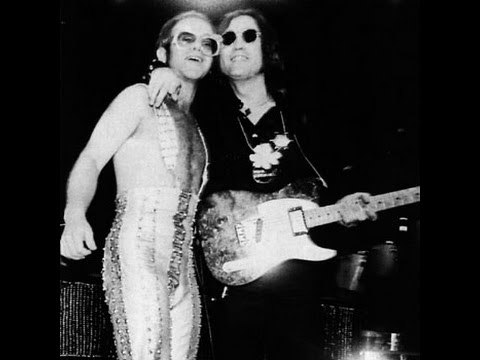 John Lennon featuring Elton John: “Whatever Gets You Through The Night” (1974, written by John Lennon).