Happy 80th birthday to the man born Neil Leslie Diamond on January 24, 1941 in Brooklyn, NY. Singer, songwriter, poet, actor, legend. Whether you sang along with The Monkees version of “I’m A Believer” or the cover version from the “Shrek” soundtrack, or if you sang “Hello Again” during “The Jazz Singer” movie or during “Saving Silverman”, or if you joined in with the Fenway crowd to sing “Sweet Caroline” or laughed at the quarantine version of that song, there has not been a generation that was not touched by Diamond’s music in nearly 55 years. That is the stuff superstars are made of. As a native New Yorker myself, I could not be more proud to hail from the same state as one of the most prolific songwriters of the 20th century. Happy birthday, Neil Diamond.

“I’ll weave his web of rhyme
Upon the summer night
We’ll leave this worldly time
On his winged flight“.

I know we are in a serious situation, but I need a break from the gloom, doom and bullying by way of hoarding. Music has always been my refuge and watching those beautiful Italians singing to each other from their balconies reaffirmed my belief that music is the answer. So until the old normal returns, I am going to share a song I listen to that helps me escape the current state of things, if only for a few minutes each day. And if this helps anyone else, even better.

I am someone with a highly repetitive nature.  I can listen to a song I adore for days at a time and watch the same show or movie I love for weeks without getting bored.  Sometimes I watch something so many times I am afraid I will need an intervention to stop.  One movie I have been watching a lot recently is 2001’s “Saving Silverman”.  I knew nothing about it the first time I caught it on a movie channel except that Jack Black was in it, and that was all I needed to know.  I had fallen in love with him after I saw “High Fidelity” and “School of Rock” because not only is he a good singer/musician, but he is also hilarious.

What I did not know about “Silverman” was that at the heart of the movie, Black and two of his buddies are in a Neil Diamond cover band.  I love that man, too, so I was thrilled to see him make an appearance at the end of the movie when the guys in the cover band not only meet their hero, but also sing with him onstage at one of his shows as well.  Diamond is very funny in the film and even quotes lines from his own songs.

I grew up listening to his music, but then again who didn’t?  From the Monkees to “Shrek” to a variety of artists covering his songs (Chris Isaak with “Solitary Man”, UB40 with “Red Red Wine” & Urge Overkill with “Girl You’ll Be A Woman Soon”) to his movie debut (in “The Jazz Singer”) to his E.T. inspired song (“Heartlight”) to the Boston Red Sox adopting “Sweet Caroline” as their unofficial official anthem, to Diamond’s reworking of that song in an Instagram post by changing the words from “touching hands” to “washing hands”  to match our new normal, Diamond is omnipresent.  Basically if you have been alive in the last 50 years there is no way you cannot know who this unbelievably talented artist is.  He has won every award and accolade out there and is undoubtedly one of America’s greatest songwriters of all time.

With so many fabulous enduring songs to choose from, it is hard to pick just one as my favorite.  I sort of shuffle them around depending on my mood so that what I am listening to at the time determines what I like best at the moment.  Right now I have rediscovered how much I love the string arrangement introduced in the second verse of today;s song.  It underscores Diamond’s voice beautifully and increases the happy feel of the song, at least it does for me.  It was his first number one record in America and put him on the music charts in several countries around the world as well.  The lyrics are fabulous, too.  I am proud to bow at the altar of the Diamond.

“Hitchin’ on a twilight train
Ain’t nothing there that I care to take along
Maybe a song
To sing when I want“. 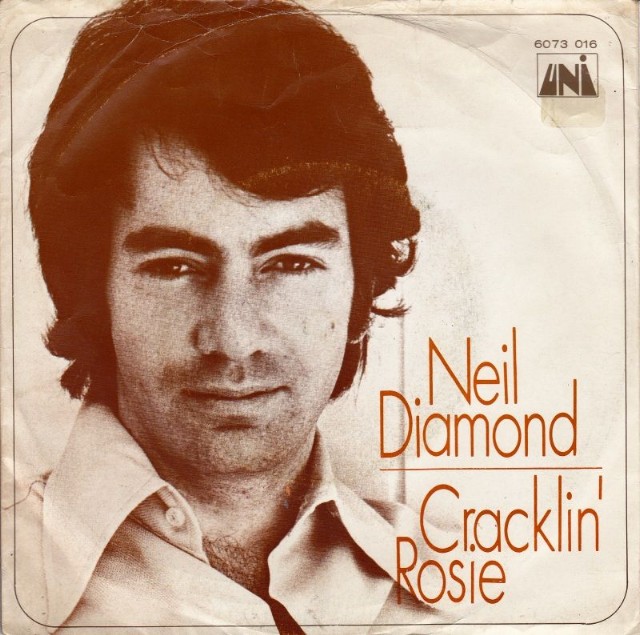