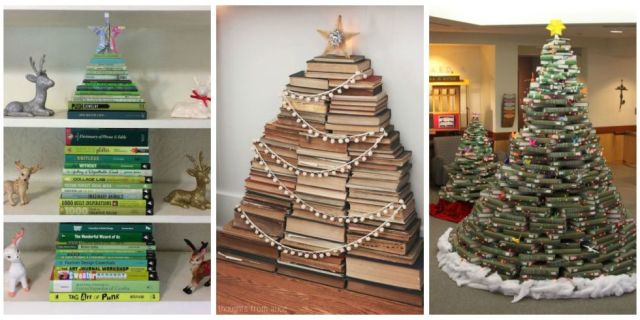 Christmas trees made from stacks of books!!!  (Original source unknown)

After that, it was re-recorded over a dozen of times, and these are my top four faves:

Louis Armstrong and Velma Middleton – “Baby, It’s Cold Outside”  (This is from their nightclub act so the singing is peppered with jokes.  It was recorded in the early to mid 1950’s & it is fabulous!).

From 2003 – Will Ferrell & Zoey Daschanel (from “Elf”):   “Baby, It’s Cold Outside”  (This is a really nice version from the movie, but for the film’s soundtrack she sings this with Leon Redbone.  In the movie he provides the voice of Leon The Snowman & as a bit of trivia, he sang the theme song to “Mr. Belverdere”).

"Now I've been happy lately
"I've had bad dreams too many times,