On this day in 1994 Jeff Buckley released his stunning debut album, “Grace”.  His voice had a depth and spirit beyond his young age of 27, thanks in part to his distinct four octave tenor range.  He began his career as a studio guitarist and performed in clubs singing songs by other artists before focusing on his own material.  He wrote or co-wrote seven of the ten songs on “Grace”, using three songs by other artists to complete his track listing.  I love all three, especially “Lilac Wine”, but his version of today’s song, a Leonard Cohen classic, is just beautiful.

I loved it from the first time I heard it, but really swooned over it after it was used at the end of an episode of “Without A Trace” (season 1, episode 23).  FBI agent Jack Malone, played by Anthony LaPaglia, is sitting in a chair thinking about his day dealing with a gunmen who had lost all hope due to the death of his wife on 9/11.  Malone is staring at a picture of the World Trade Center hung up in his bedroom.  Suddenly his eyes move across the wall to a nearby window where you see the exact same view as what was in the picture but now without the Twin Towers.  It was one of the most heart wrenching scenes of any TV show I have ever seen.  And Buckley’s voice singing today’s song only added to that  feeling.

His birth father, Tim Buckley, was a fairly successful folk singer (he appeared on an episode of The Monkees) who later incorporated other musical genres in to his work.  Tim died in 1975 at age 28 from a drug overdose.  But of all the cautionary tales learned from rock & roll, his son’s death from drowning at age 30 is just one more to shake your head at and wonder why.

“I did my best, it wasn’t much
I couldn’t feel, so I tried to touch
I’ve told the truth, I didn’t come to fool you
And even though it all went wrong
I’ll stand before the Lord of Song
With nothing on my tongue but Hallelujah“.

Not even two weeks into the new year and we already have a devastating loss in the world of music.  David Bowie, the 1970’s rock icon who transformed himself over and over throughout his illustrious career, died after an 18 month battle with cancer on January 10.  He was 69 years old. 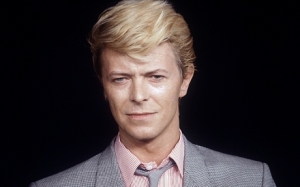 Born David Robert Jones in London on January 8, 1947, he changed his last name to avoid confusion with the other Davey Jones in The Monkees.  Bowie’s  musical career began with his break through album “Space Oddity” in 1969 and he spent the 1970’s establishing himself as a glam rock, art rock musician like no other with songs like “Changes“, “Golden Years“, “Rebel Rebel” and “Suffragette City“.  He easily segued from his Ziggy Stardust persona of the 70’s to the suave, well dressed gentleman in a string of 1980’s videos for hits like “Modern Love“, “Let’s Dance“, “China Girl” and “Blue Jean“.

Not only did Bowie do great work as a solo artist, but his collaborations were stunning as well.  Aside from his ground-breaking work with the likes of Lou Reed, Brian Eno and Iggy Pop, Bowie also worked with John Lennon on “Fame“,  covered the Motown classic “Dancing In The Streets” with Mick Jagger, joined Bing Crosby for a wonderful collaboration of “The Little Drummer Boy/Peace On Earth” and teamed up with rock group Queen for “Under Pressure“, to name a few.  These collaborations showed how innovative, versatile and truly unique Bowie’s musical genius was.

Bowie also had several acting roles, most notably in the movies (he played Pontius Pilate in Martin Scorsese’s film “The Last Temptation Of Christ” as well as roles in “The Man Who Fell To Earth” and “The Linguini Incident“) and on the Broadway stage (he played the title role in “The Elephant Man” in 1980-1981).  He received a star on the Hollywood Walk of Fame and in 1996 he was inducted into the Rock & Roll Hall of Fame by David Byrne of The Talking Heads.  On January 8 2016, on what was Bowie’s 69th birthday, his last recording “Blackstar” was released.

My two best memories of Bowie after his collaborations are when the TV series “Without A Trace” used “Space Oddity” in Anthony LaPaglia’s signature episode entitled “John Michaels“.  The second was Bowie’s performance at the Concert For NYC in 2001.  He was humble and grateful to the men and women who kept his adopted home of Manhattan safe and showed that with a stand out performance of “Heroes”.  I cannot seem to find that performance online, so here is that song from his “Live By Request” show a year later in 2002.

Rest in peace, David Bowie.  “And may God’s love be with you”. 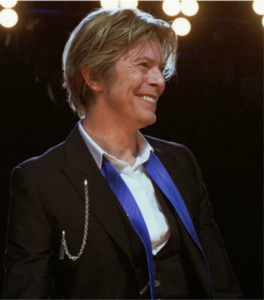 Please note that I do not own the rights to anything.  I am just sharing some of my favorite music with you.