On this day in 1969 The Beatles took the iconic photograph that would become the cover of their final studio album. It was August 8, 1969 when The Fab Four walked in stride at the crosswalk outside Abbey Road studios, which they used as the title to their last record, released the following month.

Around the same time three years earlier, the group released Revolver. It was hailed as an innovative gem & marked significant growth in the four men as musicians and songwriters. George Harrison bemoaned one of the trappings of success with his song “Taxman”. John Lennon added a psychedelic feel to “Tomorrow Never Knows” while allowing Harrison a chance to experiment with a backwards lead guitar part on the glorious “I’m Only Sleeping” (Day 178).

But for me it was two of McCartney’s songs that I found most beautiful. The first, “Here There and Everywhere” was said to be inspired by Brian Wilson’s “God Only Knows”. And today’s track featured one of my favorite instruments ever, the French horn, which I fell in love with because of this song. It was yet another example of how The Beatles took some very scenic routes to make their legendary music.

“And in her eyes you see nothing
No sign of love behind the tears
Cried for no one
A love that should have lasted years“. 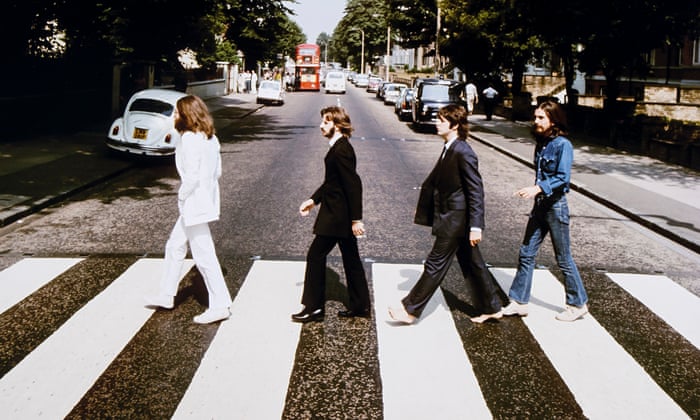 Top: An unused picture from the Abbey Road photo shoot with The Beatles walking in reverse from the photo which was chosen for the record. Bottom: The group’s 1966 release. (Images found online.  Original sources unknown.)