Three days into December brings us to the first holiday song of the year, especially since today is the 56th anniversary of a seasonal staple. On December 3, 1964 CBS debuted the animated TV special, “Rudolph The Red-Nosed Reindeer”, and it became a cherished & permanent part of the Christmas season to this day.

I grew up watching it like the majority of the population. But I saw this perennial favorite in a completely different light when I watched it with my dorm mates my freshman year of college. The other girls & I were talking about it during dinner at our hall cafeteria and asked our male counterparts to join us. That invitation led to screams of laughter at the idea that they would ever spend an evening watching a story about a reindeer with a shiny nose. But five minutes after the show started, the guys appeared. The other girls surmised that it was because they missed us. I wish it was that simple. The guys were a perfect audience until Rudolph met Clarice. Then their true purpose for being there emerged.

They made up their own dialogue so Clarice sounded like a cheap hooker (i.e., “Hey baby, let me make something else light up for you”, “Do you want to see what part of me gets red, too?”) while Rudolph outlined explicit ideas of what type of reindeer games he really wanted to play with the pretty doe (I will spare you those details & leave you to use your own imagination). I guess I should have been appalled that the guys turned a show about a treasured Christmas icon into a Penthouse letter. However, I must admit it was hilarious. Of course, after that night, this TV special never looked quite the same to me again. But I still watch it every holiday season and love all the music in it, especially today’s song.

“Oh, ho the mistletoe
Hung where you can see
Somebody waits for you
Kiss her once for me“. 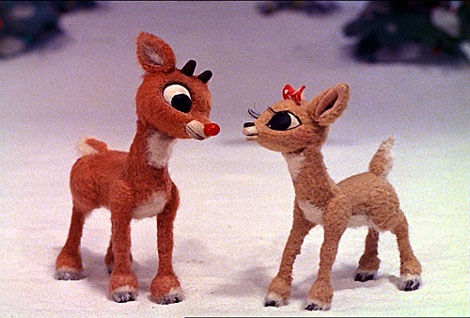