Today is a celebration for two men from one of my favorite bands ever created, The Doors. December 1 marks drummer John Densmore’s 76th birthday and December 8 is the 77th birth anniversary of lead singer Jim Morrison. I grew up listening to their music, read everything I could about them, worshiped Morrison’s deep eloquent poetry, swooned over every picture I saw of him and continue to mourn his loss to this day. But it is what he created with the other three members of The Doors that I adore the most. Their sound was completely unique & unforgettable. Led by Morrison’s lyrics & incredible baritone voice, Ray Manzarek’s prowess on keyboards and his ability to supply the group with a bass line from that instrument, Robby Krieger’s subtle yet skilled sorely underrated guitar arrangements & contributions to songwriting combined with Densmore’s strong solid & concise beat made them the unstoppable force they were & the legendary band they became.

The group made a legal agreement in the 1960’s that required a unanimous decision on anything regarding their music & likeness. It created tension and court proceedings over the years as Densmore & The Estate of Jim Morrison sued Manzarek & Krieger to prevent The Doors name, logo & music from being used commercially. As a fan it has been hard to watch them in this type of venue but on another level I am happy I will not be hearing their music in any ads. According to Densmore’s 2013 book, “The Doors Unhinged”, the impetus for one lawsuit was Cadillac’s offer of 15 million dollars in 2003 for the use of “Break On Through (To The Other Side)”. A similar offer by Buick in the late 1960’s to use “Light My Fire” was vetoed by Morrison who was vehemently opposed to licensing the band’s music. The other suit prevented Manzarek & Krieger from using the group’s name & logo to tour as “Doors of the 21st Century”. The original agreement was upheld in both instances. Densmore has stated he made peace with his bandmates prior to Manzarek’s death in 2013.

The Doors made a few appearances on various TV shows in the late 1960’s but the only one that most people are aware of is their September 1967 turn on “The Ed Sullivan Show” because of the controversy they created (see Day 145). But later that year they sang “Moonlight Drive” & “Light My Fire” on “The Jonathan Winters Show” and in December 1968, the band performed “Wild Child” and today’s song on “The Smothers Brothers Comedy Hour”.

This video is one of my top five finds ever on YouTube. It may be from 52 years ago, but the quality is remarkably great. Between the way it was preserved and whatever assistance it received from current digital technology, the result is a concisely clear picture with great color & lighting. The sound is superb so you can clearly hear the band, the string players & the horn section at their best. And Morrison’s voice is clear, strong, confident, deep and absolutely beautiful. But it is the rare opportunity to see him perform that makes me unbelievably happy and ready to swoon for infinity plus eternity. He manages a hint of a smile about a minute in to the song, he is playing a maraca (yes, the word is singular since he is only using one), he is in his trademark leather pants and he does a breathtaking hair flip at the end. Every band in music history had a front man, but there was only one James Douglas “Mr. Mojo Risin” Morrison. 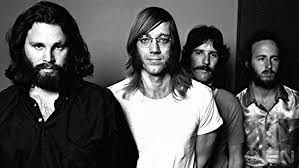 The Doors: “Touch Me” (Live performance from “The Smothers Brothers Comedy Hour”, broadcast in December 1968 when the song was originally released. Written by Robby Krieger).